Felicity Harrison's early life was one of wealth, privilege, and opportunity, thanks to having a Wall Street father, and a mother who built her own fortune with the help of her husband's earnings. It was a seemingly charmed and easy upbringing, with Felicity attending the best schools from a young age and being afforded with all the best things in general. She did get along surprisingly well with both of her parents and was relatively close with the both of them, but was closer with her father in particular. It wasn't because of money or being spoiled: Felicity genuinely bonded with her parents and learned from the both of them.

In general, her young world was fairly perfect, but that would change by her teenage years.

Before Felicity was out of high school, her world came tumbling down. Her father was busted for fraud and other charges and in the fallout, her mother's business affairs suffered as well. In what felt like a fell swoop, her entire world fell apart and everything changed more quickly than she was ready to deal with; everything that had been carefully planned and set into place was gone and Felicity lost all sense of footing and stability. For years, her life and future had been predictable, and she always had something to fall back on if her personal plans didn't work. Now, all of that was gone.

Her plans had included acting and performing and having her parents' fortune to fall back on if that didn't work out the way she had hoped. She still pursued those dreams after school, but with her father's noterity, it was difficult to establish a life of her own. A fall from grace meant scrutiny from others and working to prove herself as much as she can, both as her own person and as a person with actual talents. Felicity landed jobs here and there, mostly bit parts in bit things, and none of it worked out how she had hoped and she didn't have anything from either parent to help support herself, either. She took on odd jobs in the meantime while she continued auditioning.

She didn't mind working and wasn't so spoiled to think she was above it, but retail and customer service didn't suit her personality or goals very well. What she was good at doing was putting her acting skills to use in daily life to win people over or, really, to manipulate them. With her skills and her looks, she was able to pull it off on men in particular, playing up a sad-but-flirtacious act in order to get them to help her out. She never slept with them and refused to take it that far, but she was able to be pretty arm candy or just a girl in need of being saving if that's what she needed to play up.

Felicity eventually found herself traveling, not wanting to be tied down to one place or person -- she'd almost settled, just for a little while, and that settling down played a part in her wanting to just run off. She made her way from city to city, never staying in one place for too long. She didn't want her face to be too recoginizble or people to connect the dots too well. Nothing she did was particularly illegal, but having her face and name known would make pulling off her "jobs" a lot harder. So, she became a bit of a nomad, preferring a life of unpredictability and being on the go vs being settled in one area for too long.

When she did eventually settle down, it was in San Francisco.

Since then, she's mostly settled into life and is happy where she is, even considering going back to school and trying to ebtter herself. For now, she's content to live life as she has been and not change too much just yet. 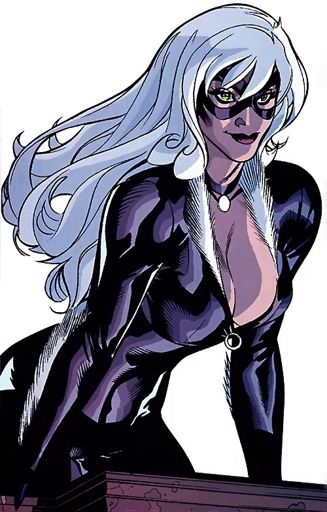 A traumatic past and sly father push Black Cat into a life of crime, at which she excels thanks to her abilities. Felicia Hardy allies herself with Spider-Man for the common good and often sets aside her criminal activity to pursue a life of heroics.


» Same initials.
» Both have criminal fathers and eventually followed in their criminal footsteps.
» Both also have sticky fingers, but aren't necessarily bad. Questionable, yes, but not bad or evil.
» They're both anti-heroes of sorts. Ultimately, they are sided with the good guys, but it may not always seem that way. » Sex is a weird and complicated thing for the both of them; it's not a bad thing to them, but there's a level of discomfort when it comes to that.